On Friday we landed in Phuket )poo+get= ...if you can't tell already, the symbols on this keyboard are not like home Ø= that was a smiley face! This is the largest of the islands n the Andaman Coast-on the west side of the southern tip of Thailand. Upon arrival we opted for the more chill area of the island in the town of Hat Kata on the SW side. We managed to score a hillside bungalow equipped with a huge marble deck with a view AND a mini+fridge! The beaches of Kata-Phuket were bustling. Lots of water sports, warm water, and cute children playing a game that was a mix between volleyball and soccer )volleyball net and ball, but no hands! We enjoyed our evening watching children light \fire balloons\ or at least that's what we were calling them. Looked like little mini hot air balloons that float off into the night sky + very cool, and supposedly good luck! At dinner we made the decision that while Phuket was nice + we had heard of more beautiful islands, with less +seedy sightings+ (unfortunately there is a high volume of prostitution that is popular with Western\American men in Phuket) and as our time was limited we decided to hop on the first ferry to Ko Phi Phi! \photo from deck of Phuket+Kata bungalow\ 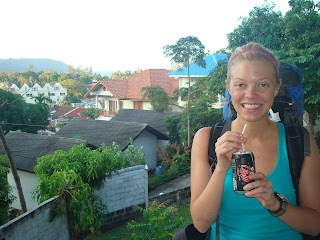 Upon the ferry we opted for rooftop front chairs + great view \ dumb decision with little SPF and no hats + we d be paying for that later Ø= After about 2 hours on the boat and 2 Dramamine for Brett, we spotted Phi Phi aka Paradise! Words can not describe and pics will never do justice. This is a top 10 see in a lifetime. The jagged limestone peaks, tropical jungle, jade water, white beaches along curved bays are breathtaking... as are the reminders of the effects of the 9.5 magnitude earthquake turned tsunami just over 4 years ago. It shakes you to think of the 6 thousand lives lost. Just being on those beaches you canæt help envisioning where the nightmare took place. But the beautiful country and its people have and continue to rebuild. They are focused on moving forward and we've been told the towns and beaches look just almost as they did pre+tsunami. 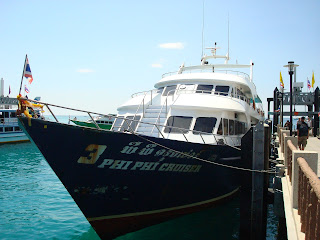 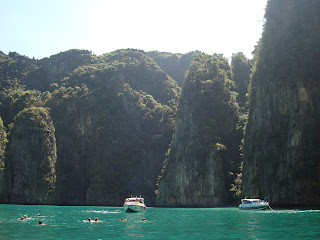 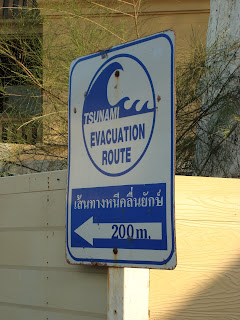 The island's ban form cars, motorbikes and tuk tuks is a nice break + our beach (Hat Yao\Long Beach) has no pay phones and is only accessible by long tail. Our ocean view bungalow is fit for honeymooners (our trip +splurge+ at the price of 70 bucks-night, but heck, when a dinner for 2 WITH bottled water AND beer comes to 3 bucks, you deserve a splurge!) During the day we find time to at last just sit, crack open our books, and enjoy the beach! In the afternoon we took a break to head into town for a rewarding hike atop Phi Phi View point. Back from the hike I decide it's been too long since I've shopped )the shopping here is crazy, so cheap, and everywhere) after 15 minutes and only 15 bucks I managed to find a 100% linen sundress, a new purse-bag, AND some coconut coasters to replace those Lucy mistaken for a chew toy a few months back. \photo of room entry way in PhiPhi\ 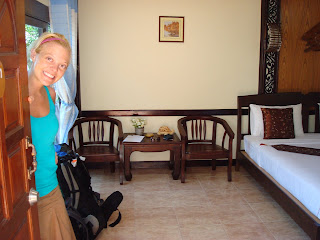 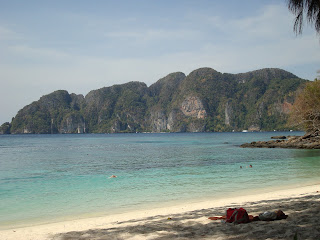 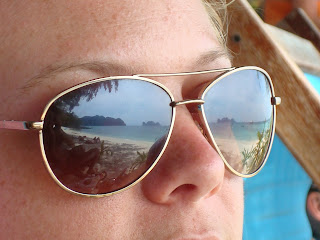 \time for some bartering\shopping!\post hike 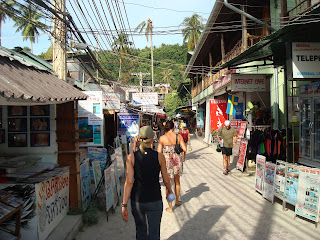 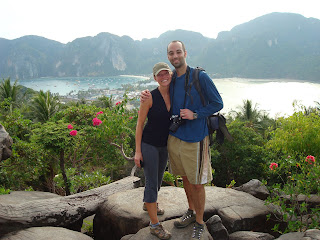 Our last day in Phi Phi we wake early to board our private longtail we've hired to tour us around Phi Phi Ley + the island where The Beach was filmed. Early bird DOES catch the worm + we were the first 3 +farange\foreginers+ on the beach! 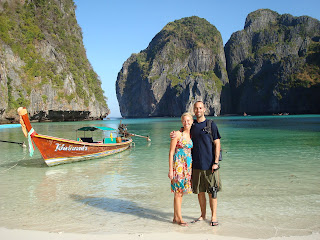 This is the most beautiful place I have ever been in my life. Truly. 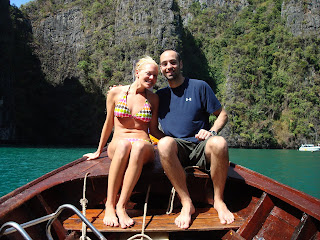 Next stop + snorkeling! Thousands of fish, water so clear you don't even really need a mask + breathtaking! 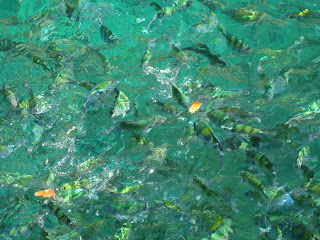 After lots of swimming stops in amazing emerald waters we made our last stop at Monkey Beach. These silly little guys scale down the jagged slate cliffs as soon as they hear a boat, as they know a boat means free fruit. You just had it over and away they go. So cute!
Ahhh, all this computer work has me worn out, time for a break, maybe a 5 dollar Thai massage is in order this evening! Ø=

Off to Ko Phangan in the Lower Souther Gulf tomorrow!

Cheers!
p.s. We have two cameras, and for some reason Iæm only getting the smaller one to upload pics, so the really great landscape-scenic-y ones youæll have to wait for!

Welcome to Our Blog!